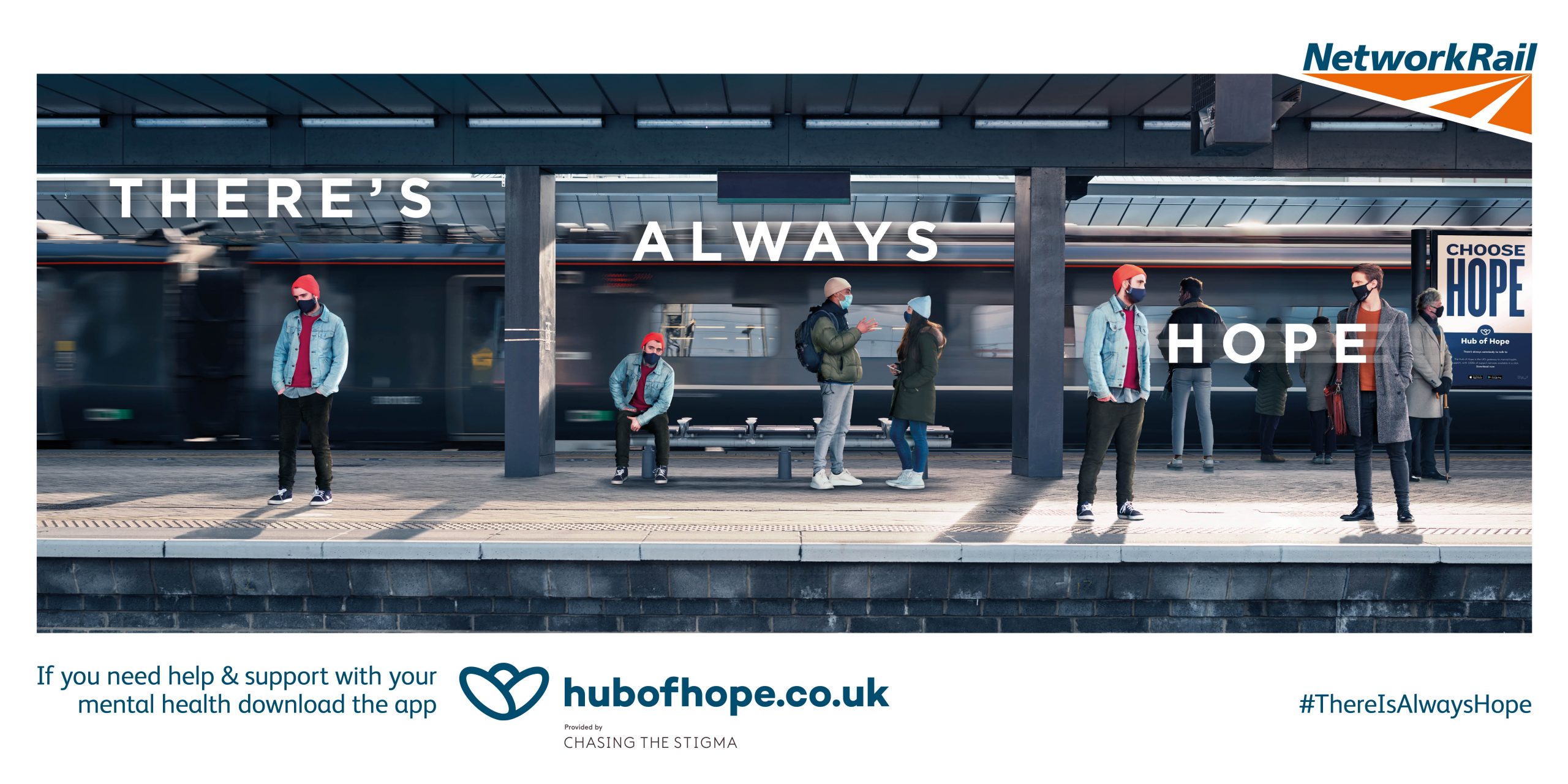 Young people have seen their mental health deteriorate the most since the pandemic began, according to new research from Network Rail and national mental health charity, Chasing the Stigma.

Almost three quarters of 18-24-year-olds (69%) say that COVID-19 has had a negative impact on their mental health compared to 28% of over 65s, while nearly half of Brits (48%) agreed that their mental health has taken a hit since the pandemic began.

The research was carried out as part of Network Rail’s new There is Always Hope campaign aimed at encouraging those struggling with their mental health to seek help before they reach crisis point.

According to the study, mental health symptoms have surged among all age groups over the last 12 months, with respondents reporting increases in anxiety (40%), loneliness (31%) and depression (31%).

The study of more than 2000 GB adults by research agency Yonder, reveals that the pandemic has also had a significant impact on students, with 64% claiming it has affected their mental health, along with 65% of those who identify as being LGBT+.

The rail infrastructure giant has partnered with charity, Chasing the Stigma to create a new film which portrays a young man looking distressed and withdrawn, who finds himself surrounded by positive moments of hope as he moves through a railway station.

At the end of the film, he finds himself having a moment of connection with a fellow passenger, which leads to them striking up a conversation as they embark on their journey. By showing these moments of care and connection throughout the film, the aim is to show that no matter how desperate you may feel, there are people around you who care and there is always hope.

The film ends with a call to action encouraging people to download the Hub of Hope app if they are struggling with their mental health. The Hub of Hope app is provided by Chasing the Stigma and brings together all of the mental health support available to someone in any given area, from NHS support and national charities like Mind and Samaritans to voluntary, private and third sector services.

Andrew Haines, chief executive of Network Rail said: “We have a huge responsibility to keep people safe and support the wellbeing of both our staff and passengers. Through this campaign, we are trying to help vulnerable people who are at risk before they even come to the rail network by signposting them towards support services through the Hub of Hope.”

Jake Mills, founder and CEO of Chasing the Stigma, is featured in the There is Always Hope film. Jake set up the charity and developed the Hub of Hope following his own suicide attempt. He realised when talking through his own personal experience that many people didn’t know where to turn within their own mental health issues and he wanted to offer support to others who found themselves in a similar situation.

Jake commented: “Mental health has never been more important, especially as the results show the COVID-19 pandemic is having a real impact on people, particularly young adults, across the UK.

“Breaking down the stigma around mental health and giving people access to the right support at the right time, is essential as it can make such a difference, and it’s the reason why we set up the Hub of Hope.

There were some hopeful findings however, with three in five claiming to know where to go for mental health support in a crisis (58%), two in five people saying they have saved money as a result of the pandemic (40%), and a quarter reported having been able to spend more time with loved ones (26%). Meanwhile, half of those surveyed said they were feeling hopeful about the future due to the vaccine rollout (49%).

Additional findings from the research revealed:

The latest campaign forms part of the rail industry’s efforts to reduce suicides across the rail network – sadly an ongoing challenge faced by Network Rail, train operating companies and the British Transport Police. Ongoing measures are being taken to prevent such incidents from taking place, such as training thousands of industry staff and running campaigns such as Small Talk Saves Lives, which calls on people to look out for one another and intervene safely if they see someone who might need help.

There is Always Hope however, has been created with the input of suicide prevention and mental health experts to signpost those at risk of suicide towards support services much earlier on in their mental health journey, before the idea of ending their life on the railway becomes a conscious thought. You can watch the film here.

Anyone struggling with their mental health can download the Hub of Hope app. The Hub of Hope can be accessed through the app, Chasing the Stigma website or at www.hubofhope.co.uk. The app also has a Need Help Now? button that links straight through to Samaritans and Crisis Text Line.